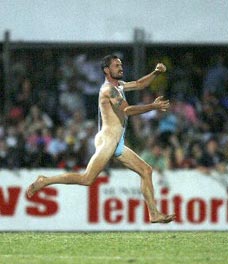 I found this page on the BBC website featuring some of the more famous streaking photos from the last thirty years, including Michael O’Brien, Erica Roe and Mark Roberts.

A 17 year old made waves at his school’s graduation ceremony when he streaked across the football field, causing all the graduating seniors to cheer madly.

Unfortunately he’s also ended up in juvenile detention center because of it.

The 17 year old junior at Catalina Foothills High School raced into the limelight last Thursday, stripping down to his jock strap and racing across the football field during the graduation ceremony.

Cameron put the moves on a couple of sheriff’s deputies trying to tackle him. But his athletic director caught Cameron just before he got over a fence.

The high school kid received a standing ovation from the graduating seniors and now he’s semi-famous.

Here’s the video on Youtube – unfortunately I can’t embed it.

This is obviously fake – if you’re live you don’t keep doing retakes like that.

Video removed due to hack

Check out the interesting blog post here about Robert Opel, the man who streaked past David Niven at the 1974 Oscars.

I’d never actually heard the conspiracy theories that the streak was planned. This article looks at the life story of Opel and how he actually got into the Oscars in the first place:

At the start of 1974, Opel was a freelance photographer for the gay newspaper The Advocate (now a leading national magazine). When he showed up at the Academy Awards he used these credentials, and a great deal of exaggeration, to make himself appear a more significant journalist than he actually was (nobody questioned the validity of a long-haired journalist in a blue jump suit?). Once Opel was in, he knew that his incongruous appearance could have potentially raised red flags before the stunt was attempted. He made his way backstage and hid inside an enormous piece of scenery.

This piece on WFMU’s site was what motivated me to finally get off my bum and redo Streakerama. I should be posting this kind of stuff and hope do to so more in the future.

Streaking:
Nude
Not a Stitch
Travelling Light
Not a Scrap
Kit Off
In the Razz
No Trimmings
Naturally Free
As Adam
As Eve
In the Skinny
In the Buff
In the Raw
Leafless
For All To See
Bare Botty Showing
DeBriefed
Socks and Sandals Only
As The Day He Was Born
In the Nicky-Noo-Nar
Sans Threads
Partially Divested
Fully Divested
Starkers
In the Altogether
Over Exposed
Au Naturel
In the Birthday Suit
Wearing the Emperor’s Clothes

This list of euphemisms for nudity has been on Streakerama since day 1 so I thought I should include in it my posts.

Well, it’s been over seven years since I first started Streakerama and finally – finally! – I’ve given it a facelift. The new site still has the old content on it, but it looks nicer. Plus I’ve added a blog so I can easily add news items and other stuff I find.

The cool thing is that WordPress allows visitors to add comments so if you’ve got any amusing anecdotes you want to add, please submit them via the comments section. I have moderation enabled but, provided you’re not a spammer, I’ll add them.