With two minutes and ten seconds left on the clock, a streaker interrupted the third and final State of Origin rugby league game in Sydney. The Sydney Morning Herald reports:

After hurdling the fence, the advertising hoardings and evading numerous security guards and the players, he ran 95 metres upfield. He fell flat on his face, a result of exhaustion and, presumably alcohol.

It is understood that the trespasser greased his body with vaseline-like substance making it difficult for him to be tackled by authorities.

Wati Holmwood, 33, was taken to Auburn Police Station and questioned by police. It is understood that he did not co-operate with officers during the interview.

He was charged with wilful and obscene exposure, and enter or remain on a playing field without authorisation. He is due to appear in Burwood Local Court on August 6.

His pitch invasion caused confusion on the field with Queensland players scoring a try that was later disallowed due to the interference of the streaker. Queensland went on to win the match and the series.

This is the second streak that Holmwood has done. He was arrested for streaking at a football match at Allianz Stadium in 2011.

Apparently numerous Facebook pages have been set up to gather money to pay his fines. Judging from the laughter in the above Youtube clip – and by the TV commentators – many thought his streak was funny, though some are upset that he interrupted the match and may have changed the course of the game.

*I’ve just appeared on ABC Radio Gold Coast talking about this streaker. Hello to everyone who is here for the first time.

Police have branded the actions of a serial streaker who interrupted the dying moments of Wednesday night’s Origin decider as ‘‘idiotic and senseless’’, but Wati Holmwood has emerged as an unlikely hero on social media following his 90-metre nude dash.
The tubby 33-year-old from Tempe is being described online variously as a ‘‘legend’’ and a hero who ‘‘deserves a medal’’ after he hurdled the fence at ANZ Stadium and sprinted nearly the length of the field before falling over in front of the goal posts, where he was pounced upon by security.

At least eight Facebook pages have been set up dedicated to the serial streaker, including one page with more than 18,000 followers who are being encouraged to donate money to pay for his expected $5500 fine.

Dozens of memes also have been posted online, including one in which Holmwood is shown streaking across the finishing line of a 100-metre sprint in front of Usain Bolt.

But police, and some Origin players, are less than impressed with his actions.

“No one wants to see a grown man running around naked at a footy match and this man can expect to not only feel the wrath of the crowd but also a magistrate,’’ said Chief Superintendent Peter Gillam, who was in charge of the police operation at ANZ Stadium. 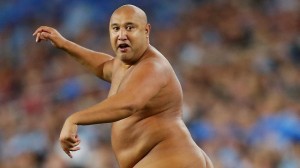 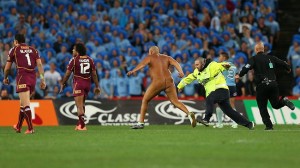 WATI Holmwood, the unsightly 33-year-old streaker who last night sprinted over 100m across the ANZ Stadium turf and condemned the 2013 State of Origin series to a chaotic, farcical conclusion, has spoken out.

Still wearing the sports shoes that were beamed live to a global audience in the hundreds of millions, Mr Holmwood appeared dazed and confused as he spoke to The Daily Telegraph after discharging himself – against medical advice – from Auburn hospital early yesterday morning.

Thankfully he had since found a singlet and shorts to cover his now infamous body and held his hands to his head as he uttered a very simple five-letter word.

“I’m sorry, I apologise about what happened, am I in trouble now?”

“It all happened so quickly, I don’t know what was going through my head,” he said.”I just wanted to make it interesting but I stuffed up Origin. A lot of people hate me now.”

The Holmwood family was sitting in front of the television watching the Origin showdown at their Kogarah home when, in the game’s dying minutes, they saw a big, bald, naked man streak across their screen in nothing but a pair of joggers.

Straight away they knew it was cousin Wati, up to his old tricks again.

‘‘As soon as I saw the bald head and dark-coloured skin, I knew that it was him. I just laughed,’’ said Wati’s cousin Ebony-Rose Holmwood on Thursday morning.

‘‘I’m not sure why he did it. We just all found it quite hilarious.’’

The 33-year-old from Tempe had not warned his family that he was planning to make an unforgettable entrance onto one of Australian sport’s biggest stages. They might have averted their eyes if he had.

…‘‘I knew he did it for the first time in 2011. That all shocked us,’’ she said, referring to Wati’s previous streak at Allianz Stadium when he interrupted a finals clash between the Wests Tigers and the New Zealand Warriors.

‘‘He’s actually a nice guy, to be honest. He’s quite mellow, the quiet one, someone you can have a nice chat to. I think that’s why it shocked us [after his first streak]. He’s not the type of person you would think to see out there.

‘‘We always had a giggle about it after the first time, and kind of made fun of it.’’

State of Origin streaker: ‘Am I in trouble now?’ – The Guardian Australia